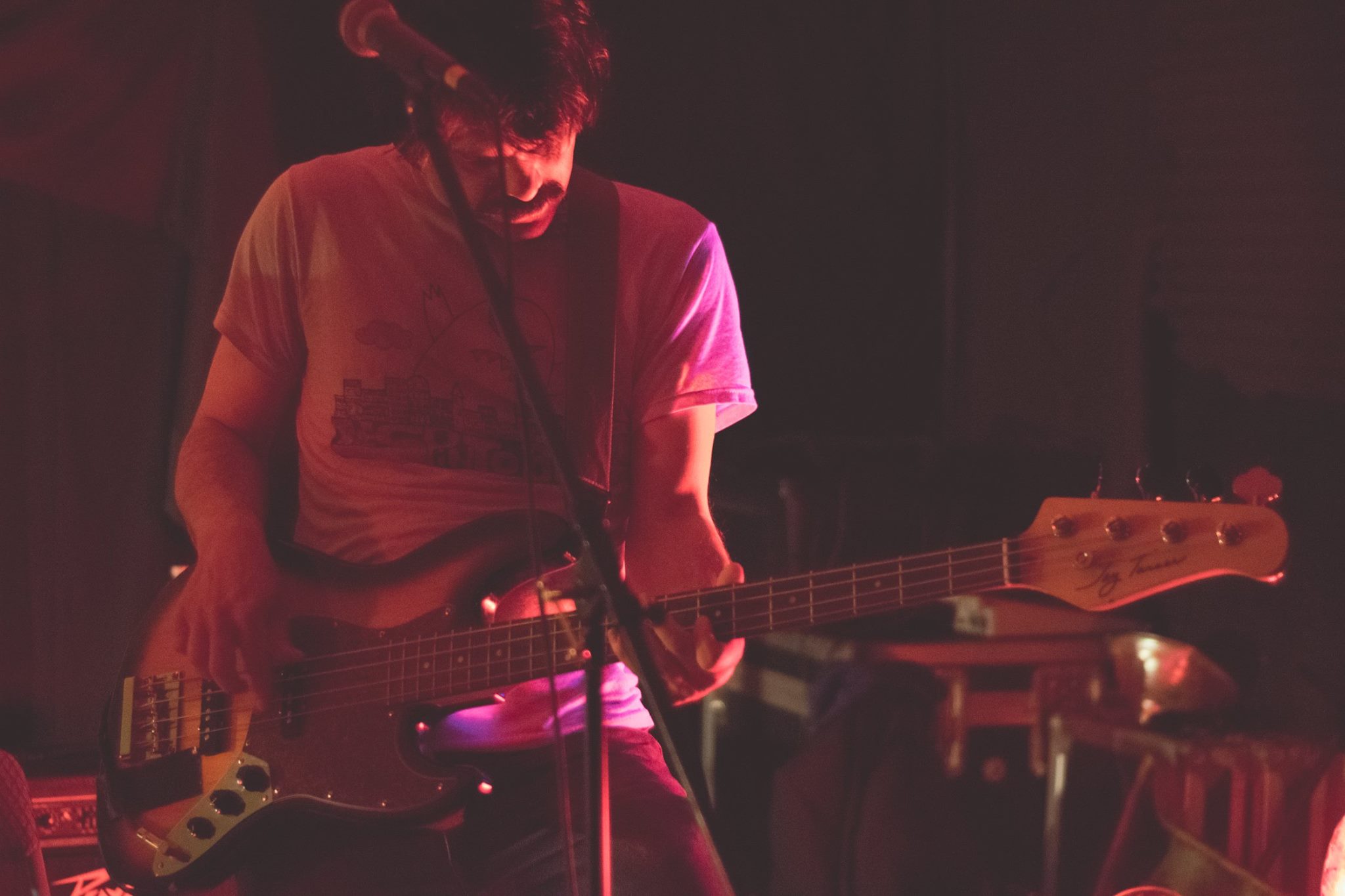 There are no fireflies in Colorado Springs the night Twin plays a house show organized by Rence Liam. But the American Spirits some of us are smoking glow against the night sky. Along with the music and company of 20 other audience members it seems more like we’re on a different star than in someone’s backyard in Colorado Springs.  It’s a weeknight, a house show. To open, a Cuban woman spins records. There is beer and homemade ceviche. When Curtis Boucher starts playing, he sits on a haystack and strums a guitar. By the time Twin starts, night has fallen. The first time I saw music with Rence Liam, we drove up to Denver to see local solo artist Cocordian followed by a Denver band called Ancient Elk. I was tired so in between bands I lied down in a musician’s van with a beautiful, psychic girl who chatted on her phone while she touched a 6 inch crystal. Common scene, Rence’s place: I tell him we have to go to a show at 6 and he says, “I have to do my dishes first.” He stands there doing his dishes, listening to records in his living room. I head down stairs for some teenage angst therapy: Janes Addiction Ritual de Lo Habitual. Every 6 months to a year I need to hear that album, even though it’s old; I’m old.

Rence’s own project, Dear Rabbit has a record release party on July 20th at Ivy Wild for their latest album, They’re Not Like You. “Their” is the appropriate pronoun because of his collaboration with multiple artists: Adam Hawkins (also of Eros and the Eschaton), Alex Koshak, Danah Olivetree, Mike Van Arsdale, and Jeremy Van Hoy of CC’s orchestra and local band Edith makes a Paperchain. It’s rough, with heavy and melodic rhythms. Although it’s well mixed it’s not overly produced and there’s something raw about it. I keep hopping from one new favorite song to another but ‘What Kinds of Doggies Do You Like?’ and ‘Like a Child’ keep calling to me.

Although he’s not the biggest fan of Janes Addiciton’s rough, gypsy style; they share some common elements. Dear Rabbit’s 2011 album they don’t love the songs features collaborative elements of 7 musicians, not including the uncredited friends featured on the title track. Liam alone sang vocals and played the accordion, cornet, piano, French horn, and organ. After I turn off Ritual in his basement, I make him watch the video for the Architecture in Helsinki song ‘Heart it Races.’ We negotiate the things he has to get done before he leaves for the show. Kate Perdoni, current director of Pikes Peak Arts Council and member of the band Eros and the Eschaton, signed by Bar None Records, said that she’s known Rence from being on the tour circuit for 6 or 7 years now.  “He’s kind of a legend.” At the end of the house show Rence wants to trade one of his cd’s with the band that performed. Twin, from Winnepeg is Brooklyn Samson and Dave Fort. Rence tries to negotiate with Samson but she says she’s going to wait and ask her partner. Rence repeatedly says, “No no, I don’t want to mess up your merch.” Samson tells Rence, “No it’s fine, I just want to make sure it’s ok with Dave.”

Fort gets back from the car and before anyone speaks he has an answer. He says, “Yeah, because it’s Rence,” and hands him a cd. Local radio jockey Cooper Erikson says, “Rence is very humble and down to earth and he’s not afraid to try new sounds.” Because of his humility, not a lot of people know that Rence used to own a Laundromat in town. He’s business minded and forward thinking, booking shows all over the country for himself and other musicians. Perdoni, says, “Wherever we played, someone knew Rence, a legend on the circuit, ever the constant wanderer. And behind the music, a jovial laugh and uplifting support of his local scene permeate. ”

Click the image below to get $15 towards your first purchase at Betandbrand! Made in the USA clothing, based in San Francisco! No Events were found.

Adventure CBD offering YP’s a 10% Discount on all orders!

You’ve probably noticed we’ve started promoting Adventure CBD lately on Social Media and so forth. So thought I’d fill you …

Our last COS Outdoor Sports & Rec Expo of the year is our Winter Edition Nov 7th! This one is …